The Game of Love

How Christ gives us a new Vision and how we are called to give that Vision to others.

This whole last week I was at the University of Notre Dame completing a workshop with the whole Echo community entitled “The Lay Vocation in the Mission of the Church,” and it was such a beautiful reminder that all Lay People, a.k.a all of us who are not priests or religious,  are called to become holy and glorious saints. It would be hard to communicate all the wisdom shared and taught in that course through one blogpost, so instead, I am going to talk about a scene from one of my favorite movies of all time, Field of Dreams, in order to encapsulate what I received in the class.

If you’re not already familiar with the plot of the movie, here’s a short summary of what happens in the movie prior to the scene we are going to talk about. Ray Kinsella, an amateur farmer from Iowa, hears a voice say “If you build it, he will come” with a vision of a baseball field smack dab in the middle of his cornfield. He decides to listen to this voice and builds the baseball field, and eventually, the ghosts of famous deceased baseball players begin to appear on the field practicing and playing baseball. After several more messages, visions, and adventures, we come to a scene where Ray, his wife Annie, his daughter Karin, and their new friend Terrence Mann are all watching the ghosts play a game of baseball. Suddenly Ray’s brother-in-law arrives at their house to remind Ray that he is going bankrupt because of all the crop he lost in order to build the baseball field. But, here’s the thing: Ray’s brother-in-law can’t see the baseball players. He even walks right through the middle of the baseball game as if nothing is there in the beginning of this scene. He cannot understand why Ray would build this baseball field and is completely baffled as to why he keeps it, refusing to sell the property to save his family. The way Ray is living simply does not make logical sense to his brother-in-law.

As Ray and his brother-in-law continue to argue about the property in the scene, his brother-in-law’s rage and misunderstanding reaches the point where Karin, Ray’s daughter, gets hurt, and it is only then that the brother-in-law can see the baseball players because one of them steps off the field in order to heal Karin. Then, his eyes are opened to seeing the rest of the players on the field, and he tells Ray to not sell the field because of the precious gift it bears.

In many ways, this encapsulates the lives we are called to live in the world during our regular, everyday lives. Just as Ray hears the voice of someone calling him to live a certain way, so too have we heard the voice of Jesus Christ calling us to live our lives in a different way. He calls us to live not by the perfection of the world that measures in results and productivity; rather, He calls us to live by the measure of Charity doing all things with great love. So, we listen to Jesus as we grow up, and He leads us on the journey of life going on different adventures and trying to enact His will in our lives. And on this journey, just as Ray begins to see these baseball players arriving on his baseball field, so too do we begin to see the world in a different way as Christ’s Love transforms us. We see the ways in which God’s Love moves beautifully and mysteriously to bring those who hear back to Him. Unfortunately, not everybody is able to see the world as we do.

The way of the Christian is the way of the Cross for the world does not see the way we do. It cannot understand why we live with such Love and Vigor in the face of a world full of suffering and sin. So then, the world persecutes us, tells us we’re wrong, and does everything in its efforts to “free” us from the apparent delusions that there is a Love which holds the whole universe together and gives it direction. But, Christians have stood in the face of such accusations for millennia, and when violence was used to clear them out of the way for the good of the world, it was oftentimes here that others began to see the Truth like the centurion who proclaimed Jesus the Son of God right after Jesus gave out His final breath (see Matthew 27:54). Whether in death or life, we are called to witness to the Play of Love that is always happening around us since we are encapsulated in the dynamic Love of the Trinity. In everything we do, we have the chance to uncover this reality to others by the way we act with Love towards God and our neighbors. This is the Mission of the Lay Person in the Church - to help humankind return to the God of Love that it has lost in the midst of sin. May we, like Jesus, receive the grace necessary to witness to the great Love of the Trinity so that all people we meet and interact with may return to this Loving God who so desperately pursues them every day of their lives.

“He was in the world, and the world came to be through him, but the world did not know him. He came to what was his own, but his own people did not accept him. But to those who did accept him he gave power to become children of God, to those who believe in his name, who were born not by natural generation nor by human choice nor by a man’s decision but of God. And the Word became flesh and made his dwelling among us, and we saw his glory, the glory as of the Father’s only Son, full of grace and truth.”

Tuesday of the Second Week in Ordinary Time 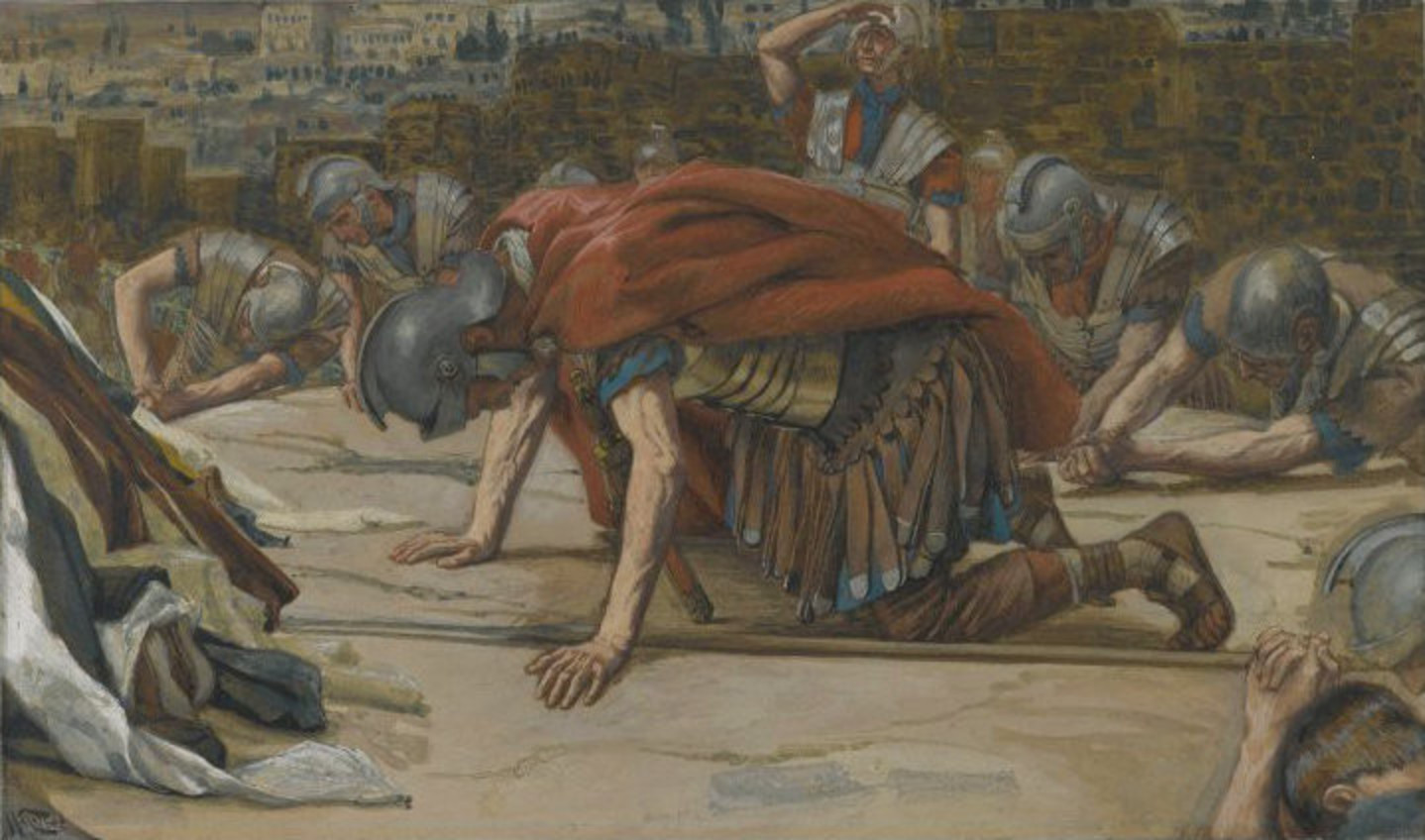 "The Confession of the Centurion" by James Tissot

In the 1st reading from this 5th Sunday of Easter, we are told of the continual evangelization efforts of Paul and Barnabas among... END_OF_DOCUMENT_TOKEN_TO_BE_REPLACED

God's Will For Our Lives

Last week I had the blessing to attend a Parish mission in Providence, RI, and the speaker made a point that I think all... END_OF_DOCUMENT_TOKEN_TO_BE_REPLACED

You shall perform even greater works.

It is amazing to consider the power of St. Peter and the apostles after Pentecost in the 1st Reading from Last Sunday’s Mass.... END_OF_DOCUMENT_TOKEN_TO_BE_REPLACED